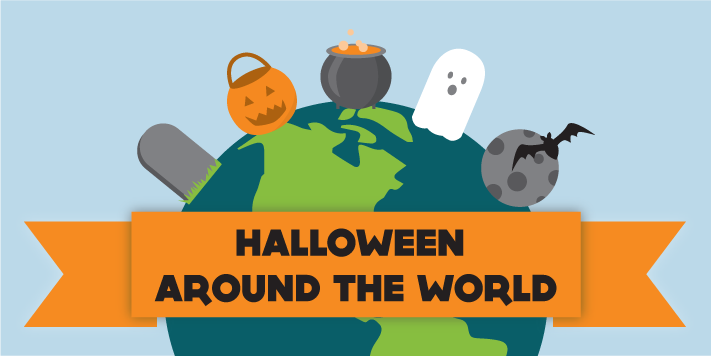 As the end of October approaches, you may spend your nights watching ghoulish monsters in scary movies, carving faces into pumpkins, or dusting off your witch's hat to welcome trick-or-treaters. Have you ever wondered how all of these fun and spooky traditions started?

Keep reading to learn about the origins of Halloween and similar traditions from around the world! 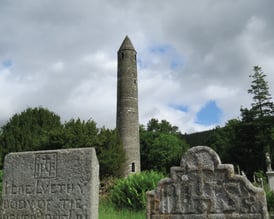 Many Halloween themes and practices can be traced back to Samhain (pronounced sow-win), an ancient Celtic tradition that marked the change in seasons from the fall harvest to wintertime. Celts believed that between the fall equinox and the winter solstice, the barriers between the physical and spiritual worlds weakened. Druid priests lit communal bonfires "said to welcome the spirits that could travel to Earth during this special time," but some spirits were more benevolent than others.

To ward off evil spirits, villagers painted their faces or dressed in disguise, "were said to carry treats in their pockets to give away as bribes," and left offerings outside the village – some of the earliest connections to modern-day Halloween trick-or-treat traditions. Even jack-o-lanterns originated during Samhain, as turnips, beets, and potatoes were turned into lamps to scare away negative forces. As Christianity took hold in Ireland, Samhain was "reframed as a Christian celebration," but certain pagan elements remained. Eventually, October 31st became All Hollows' Eve or Halloween, and the traditions took hold across the US with the arrival of Irish immigrants in the 1800s. 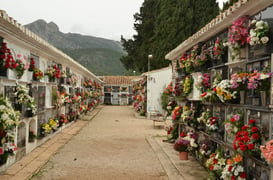 In predominantly Catholic countries, All Saints' Day and All Souls' Day are prominent holidays for remembrance. The former is a time to honor Christian saints and martyrs while the latter is reserved for remembering the "faithful departed." 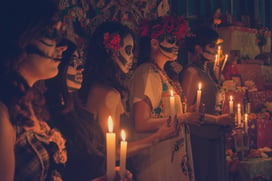 As in Spain, All Saints' Day and All Souls' Day are significant in Latin American countries. Most notably, within Mexican culture, Día de los Muertos is a time to celebrate the lives of family members who have passed away. The holiday originates from Aztec, Toltec, and Nahua cultures; they  believed death was "a natural phase in life’s long continuum" and that "mourning the dead was disrespectful." Today, the Day of the Dead is comprised of both pre-Columbian traditions and Christian feasts. Families welcome spirits to the realm of the living by putting out water, their loved ones' favorite foods, family photos, candles, and marigolds on an altar, or ofrenda, in their homes or at the cemetery.

The skeleton and skull imagery commonly associated with Día de los Muertos originates from a political cartoon by José Guadalupe Posada, which depicts a skeleton in feminine dress referred to as La Calavera Catrina, "the rich." Today, La Catrina is an important symbol for the Day of the Dead, and many celebrants put on makeup and wear costumes to emulate her image.

Though Mexico is famous for these celebrations, other Latin American countries such as Costa Rica also observe these rituals, as do some Hispanic communities in cities like Los Angeles and Chicago. 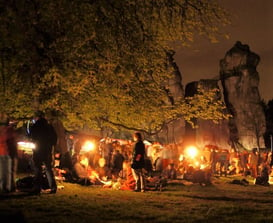 Not every ritual that inspired Halloween takes place before winter. In Germany, the last day of April and the first day of May is known as Walpurgisnacht, a holiday based on ancient celebrations for the dawning spring. Similar to Samhain and its transition toward All Hollows' Eve, these Nordic traditions "combined with the legend of St. Walburga," leading to the modern holiday known as Walpurgis Night, a time where the spirit world and the physical world dissolve their barriers.

As legend has it, April 30th was the last night witches could come out and cause trouble before springtime. People built large fires (similar to Celtic traditions), banged on drums to make noise, and sprinkled holy water on their homes to keep the witches away. In Bavaria, young people pulled pranks similar to today's Halloween trick-or-treaters. In other areas of Germany, children dressed up as witches and donned paper hats. While Walpurgisnacht did not take place at the same time as Halloween, many of its themes and traditions became popular parts of the spooky holiday.

Ready to scare up learning around the world?