Marching Along the Civil Rights Trail in 3 Days

On this day in 1963, many Civil Rights protests throughout the Southern US culminated in the March on Washington, where almost a quarter-million people joined together to peacefully protest discrimination and abuse on the basis of race. The event is most famous as the setting for Dr. Martin Luther King, Jr.'s "I Have a Dream" speech.

Earlier this year, Tour Consultant Kara joined students from New York City as they embarked on a Civil Rights tour. Follow along on her journey as we reflect on decades of activism, progress, and struggle.

As soon as we arrived, our Tour Director set the stage: "We are in a time capsule, and I want to take you back to the Civil Rights era of the 1960s. We will walk in the steps of former Civil Rights leaders and foot soldiers with empathy and understanding. We all have a cause we are marching for - what's yours?" 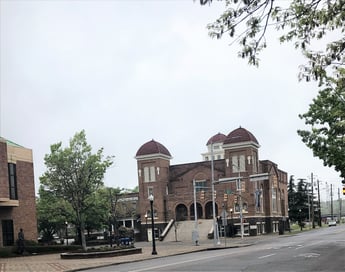 Once in the city center, we arrived at the 16th Street Baptist Church - ground zero for the Civil Rights movement. This is where the local community would organize and meet to discuss their strategy for the pursuit of equal rights. We sat down in the pews and learned about the tragedy that took place on September 15th, 1963, when a segregationist detonated a bomb outside the women's restroom, violently killing four young girls as they prepared to sing in the choir: Addie Mae Collins (14), Cynthia Wesley (14), Carole Robinson (14), and Denise McNair (11).

Our docent at the church was thoughtful as he relayed the story. He detailed the major construction and restoration efforts at the church and led us to the site of the bombing, where a permanent memorial to the victims now stands. 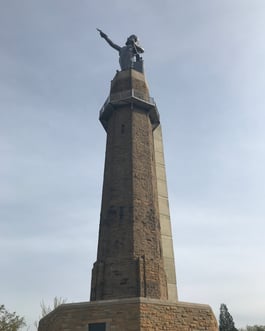 We continued our day with a panoramic tour of Birmingham that led us to the Vulcan Park museum and observation deck, were you can see the entire city from atop the Red Mountain. The museum has a replica general store and living quarters depicting how industrial workers were housed on-site, justifying their low wages. "The Vulcan" itself is the largest cast-iron statue in the world, representing some of Alabama’s most plentiful natural resources: coal, limestone, and iron ore. Birmingham is one of the only places in the world where all of these resources can be found in such close proximity; they are the building blocks of pig iron and directly contributed to Birmingham’s development.

We watched the sunset over Birmingham atop the Red Mountain and headed for Post Office Pies where a group from Manhattan and a loyal Chicagoan shared, of all things, pizza!

We started our second day with a short trip to Montgomery, where we toured sites dedicated to the Freedom Riders trail and Rosa Parks. From the now-closed shop where she worked as a seamstress, to the exact bus stop where she boarded and took a stand — or, rather, a seat — we could picture the events with a little help from our expert Tour Director.

Our visit to Montgomery led us past the large white buildings that make up Alabama's capital. It's important to note that adjacent to the State Capitol Grounds stands the First White House of the Confederacy. The city has many memorials to the Confederacy, but a recent ruling handed down next door by the state's Supreme Court ordered they be covered up.

Our group marched down Commerce St. (named after the city's long history in the slave trade) and arrived at the Legacy Museum, inside an old slave warehouse. Funded by the Equal Justice Initiative, the museum is a MUST-SEE in Montgomery, featuring displays depicting early slavery, Jim Crow-era signage, and systemic racism in our current society. 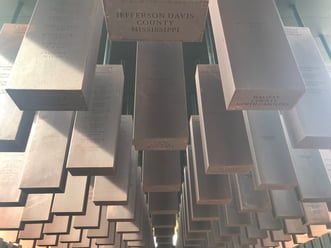 Afterward, we rode to the National Memorial for Peace and Justice. Six acres of cast-iron, coffin-shaped boxes (one for each county in the US) are thoughtfully arranged in a central atrium. Each box lists the names of victims of racial violence and the date they were publicly brutalized. Dates range from the late 1800s to Emmett Till's death in 1955. Both the museum and the memorial have exhibits of soil collected from sites where these lynchings took place.

After visiting these sobering sites, we headed to the Dexter Avenue Parsonage and the King Memorial Baptist Church, where our spirits were lifted by world-renowned tour guide Wanda Battle. After her words of wisdom, one of the students on tour serenaded us with an original piece of his own! 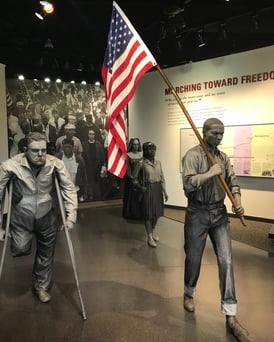 We departed for Selma and stopped at the Lowndes County Interpretive Center, also known as “tent city.” During the Civil Rights movement, marchers on their way from Selma to Montgomery stayed here overnight. Additionally, in 1965, when white landowners evicted black sharecroppers who were registering to vote, this site became their temporary home.

Both this site and the Selma Interpretive Center provide thorough educational programs led by National Park Service Rangers to help students understand the many literacy tests and restrictions administered by town hall registrants that kept black citizens from exercising their right to vote. Some clerks wouldn't issue the literacy tests; instead, they would ask a question such as, “how many bubbles can this bar of soap produce?” Often times, they wouldn't even know the correct answer to their own query! (Was there even a right answer?)

In Selma, we walked across the historic Edmund Pettus Bridge, following the footsteps of Dr. King and other Civil Rights activists to the site of the infamous "Bloody Sunday" attacks of March 7, 1965. After our walk, we paid a visit to the National Voting Rights Museum to learn about the many foot soldiers that supported the Civil Rights leaders of the time. We even met one of the marchers that day: Joanne Bland. Our Tour Director recognized her and introduced her to the group as one of the many young people who fought for equal rights during the 1960s. 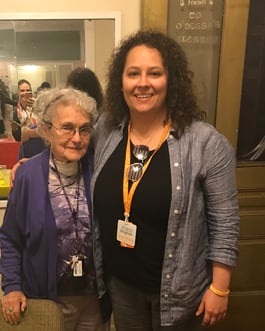 We'd worked up quite an appetite during our long journey. Thankfully, our dinner at Odessa’s Blessings included all the southern fixin’s: sweet tea, banana pudding, the best peach cobbler you’ve ever had, greens, fried chicken – the works! You can find Odessa herself buzzing around the place, making sure you feel at home. We were also joined at the dinner table by Jean Ellis, the wife of Rev. Robert Graetz – personal friends of Rosa Parks. The reverend was a white pastor at an all-black congregation. Jean shared stories of hearing projectiles being hatefully thrown at her house and “praying that this one wasn’t a bomb” for the safety of her family. I asked her if she had any apprehension coming into Montgomery during such a racially-charged period, to which she replied, “we didn’t have any second thoughts about doing good work – God’s work – for the people of Montgomery.” She advocated diversity and celebrated the unique differences of everyone in the room as we enjoyed each other’s company.

Day 3: "Bombingham" and the Children's Crusade

On our final day of the trip, we dug deeper into Birmingham's violent history and learned about "Bombingham," a nickname the city notoriously earned during the Civil Rights era due to the high number of bombings that took place there. Birmingham Police commissioner “Bull” Connor often patrolled the streets in his fleet of white tanks to incite fear and intimidate the African-American population. 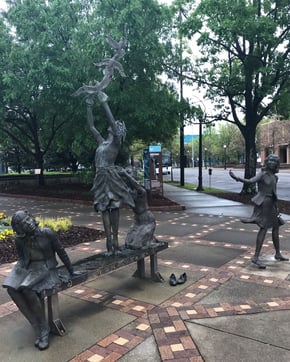 We started at Kelly Ingram Park, learning of the efforts to organize children to participate in the movement, as many adults were in fear for their lives and their jobs and they believed children would not be harmed. Disc jockeys from local black radio stations coined code words so kids would know when to assemble, but they all knew where to meet – the 16th Street Baptist Church. On May 2nd, 1963, they heard their call to action, left school in droves, and were met with unexpected force at the nearby park. Children as young as 13 and 14 years old were publicly beaten for all to see on national television broadcasts - the world was watching. This part of the trip cut especially deep on my return home to Chicago; as I told my grandmother stories from my trip, she said, “I remember watching those poor kids on TV thinking ‘my daughters are the same age,’” enraged at the thought of what was happening in the South. 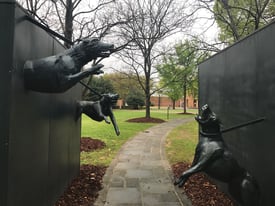 The park itself memorializes the 16th Street Baptist Church bombing as well as the events of the Children’s Crusade. Memorials of young African American children being brutalized by Birmingham police were erected in the park. One of the statues surrounding the walkway depicts vicious police dogs, snarling and biting from all angles and vividly conveying how brutal that day was for these young Civil Rights pioneers.

Truly, the most impactful part of learning about the Children’s Crusade was watching all of the 8th graders I was traveling with hear these accounts of students their own age taking up a cause so great, imagining what it would be like to take place in that march, and asking themselves “what cause would I take a stand for?”

We continued our march into the Birmingham Civil Rights Institute, where we took a comprehensive look into the history and the archives of those who contributed to the movement, and examined how we can take part in bettering the Civil Rights climate in the present day.

The Birmingham CRI holds these archives for today and the future because there are many of these stories and storytellers who remain widely unknown and unheard. This rang especially true during my cab ride to Shuttlesworth airport as I began my journey home – the driver grew up during the Civil Rights era and remembers very well the struggle to integrate, and how one of his teachers played a crucial role in bringing white and black children together in and outside the classroom. Her story, he says, is on VHS somewhere in those archives, yet to be rediscovered and retold.

Do you want to inspire leadership?