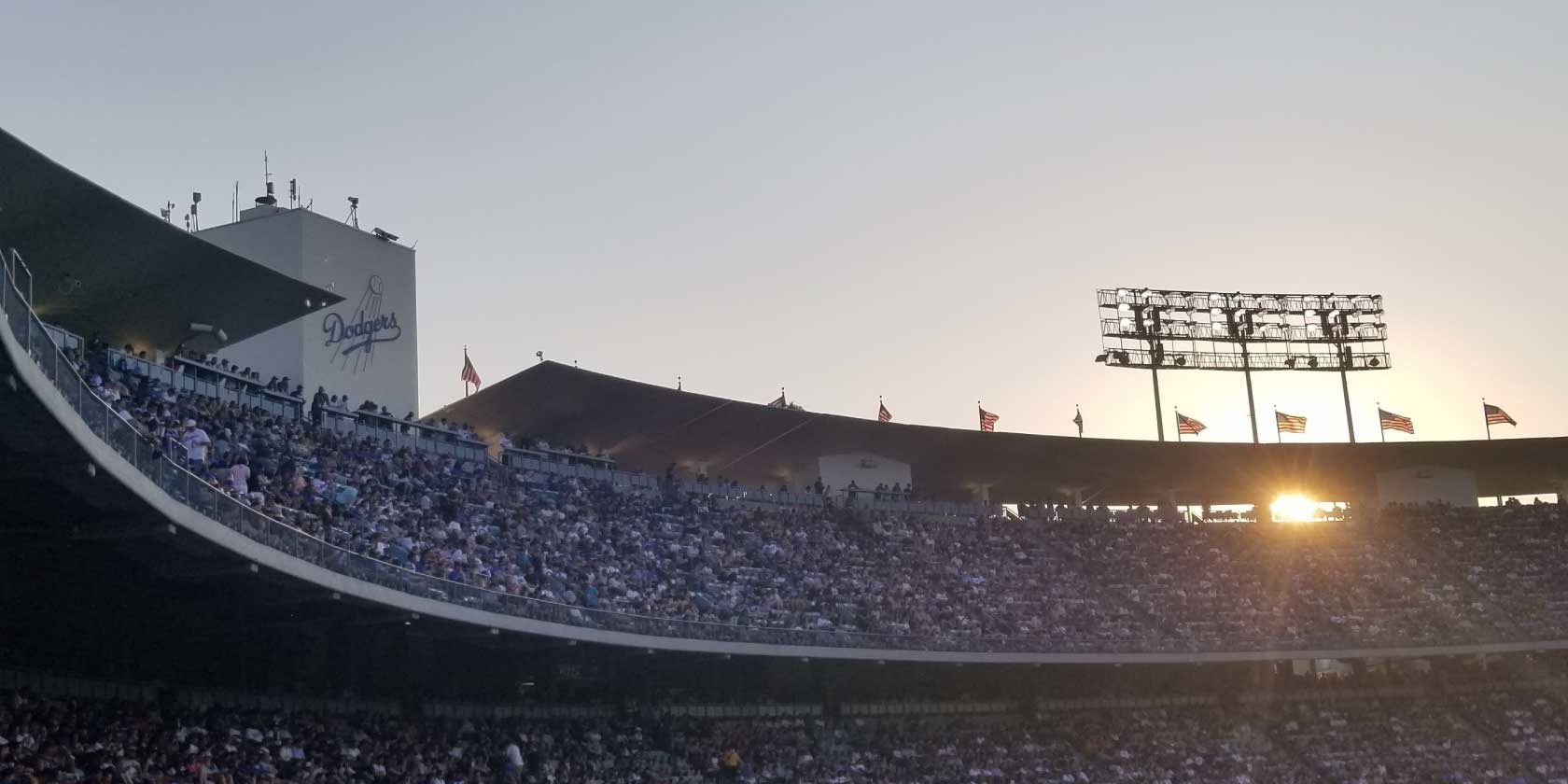 You can't deny baseball is synonymous with summer, and headquartered in Chicago, our staff is no stranger to sunny afternoons spent at the ballpark. Our team of travel experts also plan a number of student tours each year that include visits to iconic major league stadiums. From touring venues during a STEM trip to taking in a ballgame with classmates, these parks give students a unique opportunity to explore history and culture while crafting lifelong memories.

Today, when the 91st Major League Baseball All-Star Game would have been played at Dodger Stadium, we take you on a journey to some of our favorite ballparks. 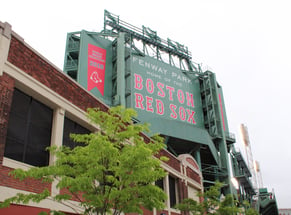 Nestled tightly in the Fenway-Kenmore neighborhood, the oldest ballpark in the major leagues dates back to 1912. While it hosted a snowy exhibition game pitting the Red Sox against Harvard College on April 9, the first official game at the park was delayed for two days due to rain. When they finally took the field on April 20, Boston emerged victorious over the New York Highlanders (later known as the Yankees).

The parks most iconic element, the famed "Green Monster" in left field, was built in 1914. The 37-foot wall served to block the view from restaurants and bars across the way and keep "cheapskates" from having free access to the game.

Listed on the National Register of Historic Places since its centennial in 2012, Fenway Park has been home throughout the years to legends such as Babe Ruth, Ted Williams, and it holds the distinction as the only ballpark with names for both foul poles.

Built in 1914, and originally called Weeghman Park, the stadium was home to Chicago's Federal League team. The Cubs moved to the ballpark in 1916, the Wrigley Family bought the team in 1920, and the name changed to its current moniker in 1926. 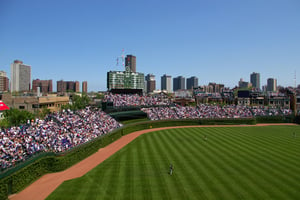 Wrigley Field is one of the most recognizable ballparks in America thanks to the wall of ivy in the outfield and the traditional scoreboard over center field. In 1937, Bill Veeck, the team president's son, planted Japanese and Boston ivy in the outfield, and officials have since had to create a special Ivy Rule just for the ballpark: "If a ball gets lost in the ivy, it's considered a ground-rule double as long as the outfielder raises his hands to indicate that the ball is lost. If he doesn't, it's considered fair play."

That same year, Veeck oversaw the construction of the outfield bleachers and the scoreboard - still operated manually to this day. No home run ball has ever plunked the scoreboard, but golfer Sam Snead made contact when he literally teed off from home plate.

Though not built until 1962, Dodger Stadium is the third-oldest ballpark in the country and the oldest west of the Mississippi River. With its seating capacity of 56,000 guests, and "with the retirement of the original Yankee Stadium and Shea Stadium in 2008," it is the largest baseball stadium in the majors - so big that the U.S. Postal Service gave it its own zip code! 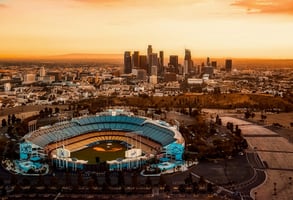 The ballpark is very much a product of its surroundings. Most importantly, the structure was built to withstand earthquakes, and it has survived quite a few. The nearby hills are replicated in its terraced parking lots, letting visitors enter the park at seat level and reducing the need for indoor ramps. The wavy roof in the outfield is reminiscent of the city's shoreline, and even the seat colors symbolize the blue skies, green foliage, sandy beaches, and golden sun in Los Angeles.

Sitting in the top deck on a sunny evening, the view of the sunset beyond the stadium walls is as captivating as the dazzling plays on the field.

This multi-use stadium was known as the SkyDome from its opening in 1989 until 2005. Now the Rogers Centre, both the Blue Jays of Major League Baseball and the Canadian Football League's Argonauts share the space. A testament to its versatility, the largest paid crowd (68, 237 fans) assembled at the stadium in 2002 for WrestleMania X8. 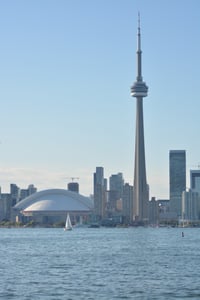 Its ability to convert from baseball stadium to football arena to rock stage make it a marvel of engineering. The stadium is also one of the few in the major leagues with a retractable roof, making it an all-weather venue. Opening the roof takes about 20 minutes, but this rarely place once a game is in progress. The team decides if the roof will be open or closed during the regular season, with American League officials making the call for postseason games.

Known in the baseball world for its bright green AstroTurf, with 85 panels covering the playing area, the field is rolled up and removed for football games. The process of changing the turf and moving the seats for a football configuration takes up to 12 hours.

Ushering in a new wave of baseball architecture, Oriole Park (often simply referred to as Camden Yards) opened in 1992 with a throwback flair. Located at the site of a former railroad hub that counts Abraham Lincoln as its most famous visitor, the stadium is "only 2 blocks from the birthplace of baseball's most legendary hero, George Herman "Babe" Ruth. Ruth's father operated Ruth's Cafe on the ground floor of the family residence located at Conway Street & Little Paca, now center field at Oriole Park." 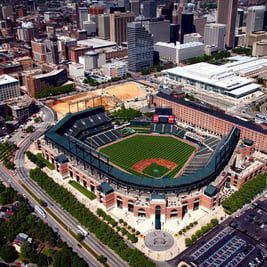 Oriole Park at Camden Yards (OPACY) has also seen its own share of history. On September 6, 1995, "Iron Man" Cal Ripken, Jr., set the record for most consecutive games played. He ended his streak just over three years later after 2,632 games - a record many believe will go unbroken.

Like every stadium in the majors, and not surprising for such an architectural icon, OPACY has its share of quirks. The most notable are in the outfield: a warning track made of rubber instead of dirt or clay and the lack of curved walls along the field. This makes Camden Yards the first ballpark since historic Ebbets Field to have only straight walls lining its outfield border. You'll dig deeper into history when you enter the park to take in a game, as the field is a full 16 feet below street level!

And although they're modern replacements for their predecessors, no list of top baseball destinations is complete without Yankee Stadium in the Bronx and Busch Stadium in St. Louis. We also can't pass up the garlic fries and views of San Francisco Bay at Oracle Park. Or the stingray touch tank at Tropicana Field in Florida. We could go on and on...

Browse our itineraries to discover more ways to knock your next student trip out of the park!